After having conquered the hearts of gamers with the Xbox 360 and having reiterated with the Xbox One, Microsoft now offers its improved version of the Xbox One, the Xbox One S. On the program, a reduced size but more power to read music. 4K content. A brand new design for new performance With its size 40% smaller than the original, the small derivative of the Xbox One comes in white and can now stand … Read more

Having won the hearts of gamers with Xbox 360 and have reiterated with the Xbox One , Microsoft now offers its améiorée version of Xbox One, Xbox One S . On the program, a smaller size but more power to read 4K content . 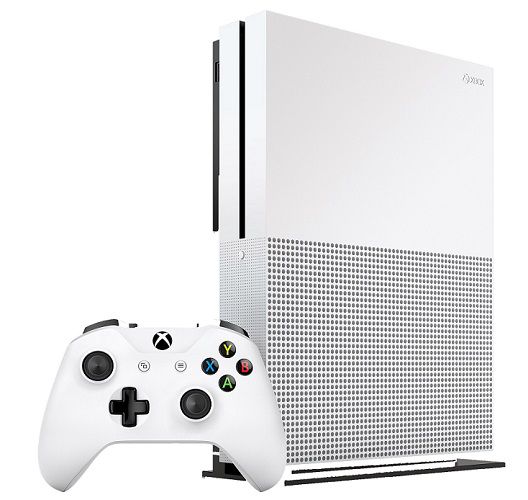 With its size 40% smaller than the original , the small derivative of the Xbox One comes in white and can now stand up thanks to a brand new support provided which will give it a whole new style. It’s up to you to opt for the horizontal or vertical style .

In addition, with its 500 GB of storage , you will be able to store your games, applications and content in general much more easily.

The controller has also been redesigned, so its design is thinner with better optimization : the wireless range has been extended and is twice as high as it was, the texture of the grip has been changedto ensure better support and your controller is nowcompatible with PCs, tablets and smartphones running Windows 10 thanks to its Bluetooth button.

4K ULTRA HD AT YOUR FINGERTIPS

Enjoy 4K videos of compatible programs and games with a richness never before seen on a console, thanks to HDR technology that gives you richer, brighter colors and even more defined contrasts.

Play all your favorite games from the Xbox One catalog in a whole new resolution, including Xbox 360 classics. Plus with its 4K Blu-ray player , pop the popcorn and watch all your favorite 4K Ultra HD compatible movies in superb 4K quality or upscaled resolution for close to 4K rendering.

There are no reviews yet.

Only logged in customers who have purchased this product may leave a review.